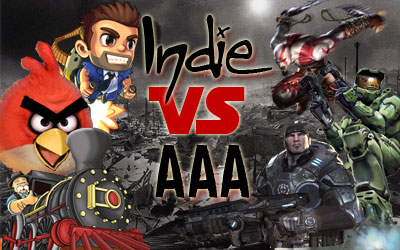 Indie Game Companies (us) and Console Game Companies that develop AAA games (them), where do you start, WHERE DO YOU START?!? Well, we MadSluggers are going to have a crack at figuring this out, thinking caps at the ready…

The best way to think of how to describe the indie game industry is to look at the characteristics of it. Unlike AAA (pronounced triple A) games, Indie games are developed by either individuals, small groups of people, or small independent game companies, usually without the type of financial support that would be expected to be received by video game publishers. Indie game companies are known for being innovative in the sense that it is an alternative to AAA games, in the sense that what they lack in graphics in comparison to AAA games, they more than make up for it in the form of innovation in regards to game-play, and unlike companies that create AAA games, indie game companies have no limitations in regards to creativity, giving them the power to do creative things with their games that companies can’t do with AAA games. So we’re known for being cutting edge, oh yeah, go us!

And on top of all that, indie games have had a rise in success in recent years, in the form of games such as Minecraft, Flappy Bird, Angry Bird, just to name a few.   Meanwhile AAA games are known to be of superior quality in regards to promotion/publicity and game budget. A game being referred to as an AAA game is expected to be a video game of the best quality possible. You know, good graphics, good vocal acting, etc… Basically, they’re the video game equivalent to Hollywood blockbuster films. Blimey, ain’t they showoffs?

The problem with AAA games nowadays however, is that a lot of them are too much the same as each other, whilst there are others that choose quality graphics over quality game-play. Indie games have started to get so successful in the last few years, that game companies known for creating AAA quality games on consoles have turned to the indie game industry, which results in them publicly supporting indie games to give them more exposure so that they had a hand in that happening in the long run, and in the process, cutting themselves a nice quiet slice of the benefits. Sly, aren’t they?

So that’s how big the Indie game industry has gotten in recent years, good job us MadSluggers are on that side of the fence, eh?