The Rise of ‘Indie’ Video Gaming 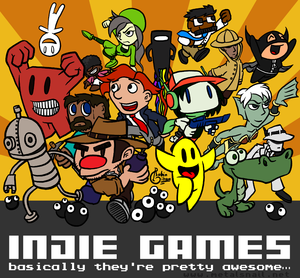 It’s amazing to think how much ‘Indie’ Video gaming has grown over the years, isn’t it? It’s incredible!

Obviously, when ‘Indie’ games emerged, they came about on computers around the early 1990s, and most of them still do so to this very day, but see, the thing about ‘Indie’ gaming is this, from the early 1990s, it was in obscurity, not may people, let alone video gamers, cared too much about it.

But then from the 21st century, ‘Indie’ games and ‘Indie’ gaming exploded in popularity.

There have also been ‘Indie’ video games that have gone on to be massively successful, some of them come together as a series of games from the same developer/s . Such an example being the ‘Flappy Bird’ franchise, going from being a company just starting out by releasing it’s first game in December of 2009, to being a multi-billion-dollar franchise that has amassed over 2 billion downloads across all platforms for gaming, and being involved in other ventures besides video games such as TV, advertisements,and even long term plans for a feature-film! Just shows, that could be MadSlug one day, “Dream, dream, dream, dreeeeaaammm”…

When it comes to ‘Indie’ video games, there are no shortages of ideas coming out for the world to see, and from what us ‘MadSluggers’ can see it will continue to do so for the foreseeable future.

Hey, we ‘MadSluggers’ got to eat too you know!