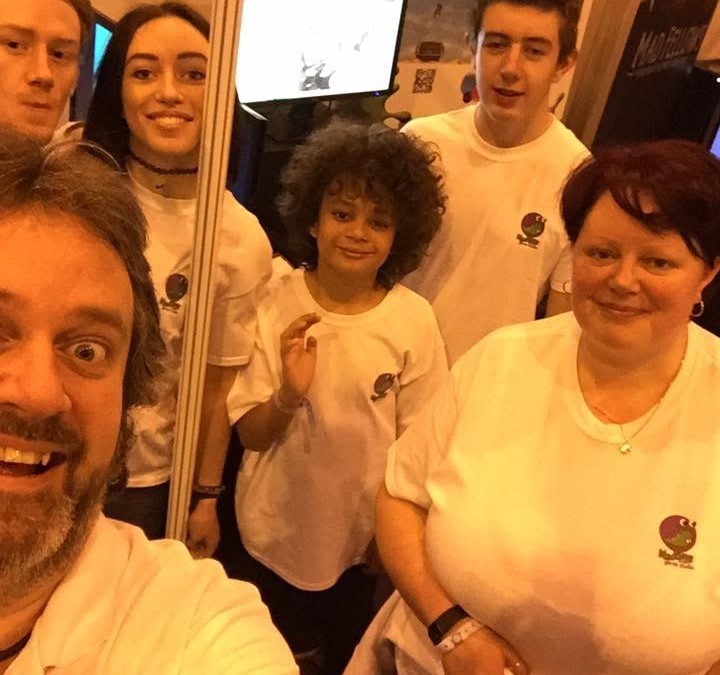 Well that was certainly an Easter weekend to remember…being part of such an amazing Gaming Festival..Insomnia57 at the NEC in Birmingham.

It was MadSlug‘s first event of any kind so wasn’t sure what to expect, but we’d totally underestimated how tiring it would be on our legs and feet!! How we managed to walk to the car park after the first day I’ll never know….it must have been the adrenaline that got us there!!

The team from Multiplay couldn’t have been any more helpful and were quick to book us in and provide us with the computer equipment we needed. We picked a stand on the end which was prime place for people walking past and seeing our tv screen and we had some awesome guys from Mad Fellows set up next to us. (Who’d have the name ‘MAD’ eh?!! 😉 )

Then the public were unleashed……..

Our main aim was to showcase Kickin Kong with a cheeky preview of Tumble Terra shown on another iPad but we found the public were drawn to Tumble Terra more, so we decided to play it on both of the iPads and leave the demo of Kickin Kong playing on the computer instead. Having this set up then led to some friendly rivalry between players as they could compete at the same time. I’ve got to admit, Dads’ were the most competitive and seeing them get great pleasure in scoring higher than their kids was so funny to watch.

We were also pleased to have a visit from our ‘Kong’ voice over artist…the one and only Nicky Priest.

Another major thing that came to light is how many people were on Android and therefore unable to download any of our games. So guess what……. that will be MadSlug’s next mission. THE PUBLIC HAVE SPOKEN!!

What I like about the Gaming industry is that there is something for everyone regardless of their age/gender or whether they’re a hardcore Gamer or just play the odd casual Mobile game. ‘One Size’ definitely does NOT fit all!!